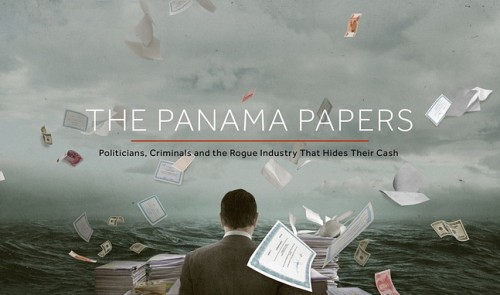 This photo illustration of the Panama Papers is seen on the website of the International Consortium of Investigative Journalists.

The Panama Papers, leaked by the International Consortium of Investigative Journalists (ICIJ) from Panamanian law firm and corporate service provider Mossack Fonseca, include 11.5 million documents, some of which date back to the 1970s, that detail financial and attorney–client information for more than 214,488 offshore entities.

German newspaper Sueddeutsche Zeitung was the first to get access to the Panama Papers database after a tip-off from a source named ‘John Doe’. The newspaper then granted the ICIJ access to this resource.

The Panama Papers, first reported by the media on April 3, illustrate how wealthy individuals, including public officials, are able to keep personal financial information private.

A searchable platform of the Panama Papers database, said to be the largest ever release of information about offshore companies and the people behind them, was made available to the public on Tuesday by the ICIJ.

The Panama Papers documents, including the names of the real owners of those opaque structures, was added to an ICIJ existing database called Offshore Leaks, a report released on April 2013 that discloses details of 130,000 offshore accounts.

A search request with the keyword “Vietnam” made by Tuoi Tre Newson the ICIJ database on Wednesday morning showed the names of 189 "officers," both foreign and Vietnamese individuals and businesses.

The search results also include 19 offshore entities, 23 intermediaries and 185 addresses.

The sets of data are a combination of information revealed in both the Panama Papers and Offshore Leaks affairs. 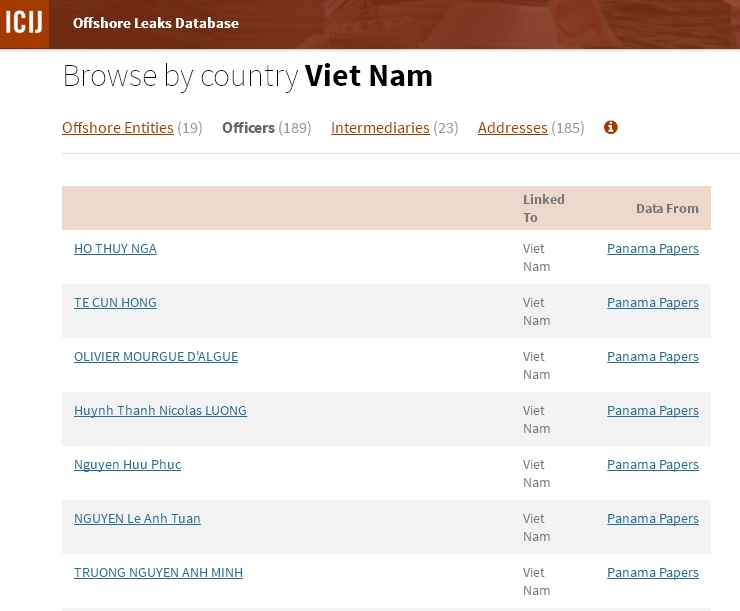 Following the revelation, Vietnam’s General Department of Taxation said on Tuesday afternoon that it had formed an inspection team to look into issues related to the Vietnamese names and companies revealed in the database, while some of the individuals involved said it is no big deal to see their names there.

“This is a complicated matter that requires a joint effort from many regulatory bodies,” Nguyen Dai Tri, deputy head of the General Department of Taxation, told Tuoi Tre (Youth) newspaper later on Tuesday.

Tri said his agency will work with the State Bank of Vietnam and the Ministry of Public Security as well as relevant bodies in countries with which Vietnam has signed a double taxation avoidance decree to verify the issue.

The anti-money laundering agency under the central bank has also started reviewing information related to those individuals and organizations that are said by the Panama Papers and Offshore Leaks to have created offshore companies shortly after the revelation was made online.

“We will verify their source of funds and transfer method,” agency head Nguyen Van Ngoc said. “It cannot be confirmed whether they have been involved in money laundering as what we have now are only their names.”

Ngoc, however, did assert that the verification process will “not be difficult” if they all transfer money via the bank system. 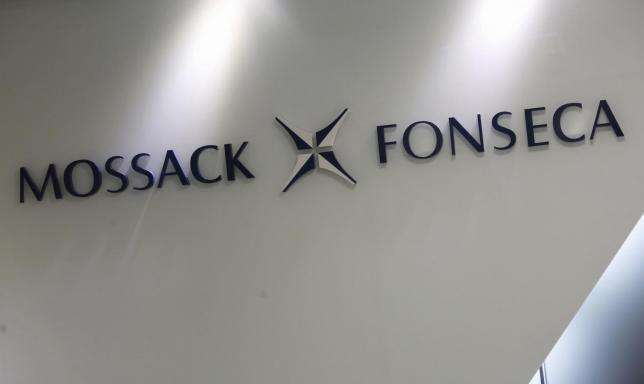 A former director of the taxation general department suggested the government set up a panel particularly tasked with studying the Panama Papers and Offshore Leaks to verify the Vietnam links.

He also called on such sectors as banking, customs, tax and public security to take action. “What needs to be done first is to request that those involved prove that their businesses and money transfer procedures are legitimate,” he pressed.

In the meantime, Can Van Luc, a banking expert, said many countries have begun to review their tax policies following the Panama Papers and Offshore Leaks affairs, and that Vietnam should follow suit.

Luc said transferring money to offshore firms is more likely intended to avoid taxes than to launder money. “This is a common trend in many countries,” he said.

According to experts, it should be noted that having their names in the leaked database does not necessarily mean a Vietnamese individual or organization has violated the law or operated an illegal business.

Three of the 189 "officers" related to the resource told Tuoi Tre on Tuesday “it is normal” to see their names in the database.

Nguyen Thi Phuong Thao, chairwoman of the Sovico Corporation PTE Ltd, said she is on the list because her company bought an overseas firm that already had a relationship with Mossack Fonseca at the time of the purchase.

“These are deals that are open, transparent and compliant with the laws of all related countries,” she asserted.

Furama was founded in 1992 and was among the clients of Mossack Fonseca.

As Sovico Corporation own 75 percent of the stakes in Furama, it is normal for Thao and her company to be on the list, she explained. 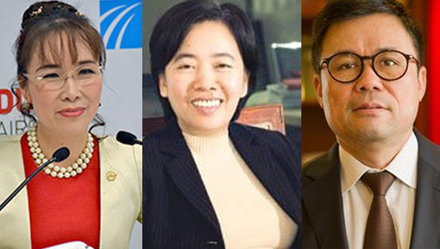 Nguyen Duy Hung, chairman and general director of the Saigon Securities Inc., said opening an offshore company is a legal overseas investment activity, which is not related to tax avoidance or money laundering.

Dam Bich Thuy, former CEO of ANZ Vietnam, also said she was not surprised to see her name in the Panama Papers leaked documents.

Thuy said ANZ has a finance leasing firm, ANZ/V-Trac International Leasing Company, registered in the British Virgin Islands as a subsidiary of the lender.

“As the then-ANZ CEO, I was also the person-in-charge of the finance leasing firm, which is registered to operate under my name,” she said. “My predecessor, Adhil Admad, is also on the list.”

Thuy said there is nothing legally wrong for businesses to open subsidiaries in tax haven countries.

“The legal wrongdoings, if any, depend on how the businesses are operated,” she said.

“We cannot solely rely on the leaked documents to accuse a company of violations which require adequate inspection from regulatory bodies to be confirmed.”